…A Batch Of Cinnamon Rolls

The last time I made a batch of cinnamon rolls was a little over ten years ago! YEP, TEN years!! Usually I crave them during the fall months when all the cinnamon and pumpkin spices are floating in the air and the weather is cooler. If my sweet tooth is acting up I will get the ones from the grocery store, which I do not think are that good, but when you do not have much time to make amazing cinnamon rolls, you have to settle right? LOL

…As Fluffy As Possible.

To be honest with you, these only take a couple of hours. Most of that time is just waiting for the dough to rise. This process is called proofing which allows your cinnamon rolls to get as fluffy as possible. A couple of hours on a Sunday afternoon is perfect especially now that we have a lot of time on our hands with staying home. So lets get started on a few things I believe you need to know before creating this recipe.

This step is super important and is one of the steps that will result in a fluffy cinnamon roll. Ensure your water is warm, between 105 to 111 degrees Fahrenheit is perfect. If you use cold water, your yeast will not activate and if you use hot water your yeast will die. Adding the sugar to your water then stirring the yeast after will help the yeast to activate faster, as the yeast will feed on the sugar. When the yeast is foamy and has doubled in size, it is ready to be used.

As important as it is to activate your yeast, it is just as important to proof your dough. This means allowing your dough to rest so that it can rise. If your home is usually cold, the best thing to do is turn your oven on to about 170 degrees Fahrenheit. Once it’s there, turn it off and leave the oven door open for about 5 minutes then place your covered dough or rolls in the oven with the oven door open. Yeast does it’s best work in warm and dark places.

Soft hands and gentle kneading will help the overall texture of your cinnamon roll. Your dough will be sticky at first but you will have extra flour on your surface to help you with kneading. As you knead, incorporate some of your extra flour, little by little. The goal is to have a dough that is tacky(slightly sticky feel) but not sticky. Your dough should be smooth and soft.

The moment you’ve been waiting for is here! The recipe is below, bake and enjoy for breakfast, lunch or dessert…My hubby ate three in four hours and I may or may not have enjoyed 6 of these in less than 24 hours! They are that good! When you bake them, let me know how you like them by dropping a line below or tagging me in your social media post! Happy Baking Lovelies!! 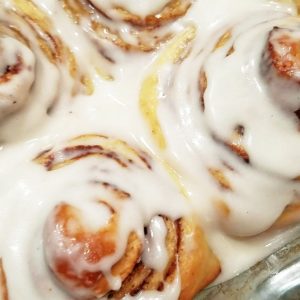